A file QR code converter converts any types of file into a QR code.

When the file QR code is scanned using a smartphone device, it will redirect the user to a document/file that you have embedded into a QR code and it will display into the user's mobile device.

It could be a PowerPoint, word file, excel file, Mp4 file and many more.

There are various reasons and benefits why you would want to use a file QR code converter to convert your documents to QR code.

One of the main reasons for that is the convenience QR codes provide, unlike no other technological advancement that has ever been made.

When it comes to delivering speed information to the end-user, the QR code technology comes first.

At the single scan of the QR code using smartphone devices, users can be taken to endless online information at their own convenience.

For example, when the user converts his documents into a QR code, it streamlines information distribution to his target audience by the simple scan of QR codes.

It presents the data directly to the user’s smartphone screen without a hassle.

So how do you use a file QR code converter to convert your important files? Read more to know-how!

File to QR code: Ultimate guide on how to use a file QR code converter to convert your files into a QR code 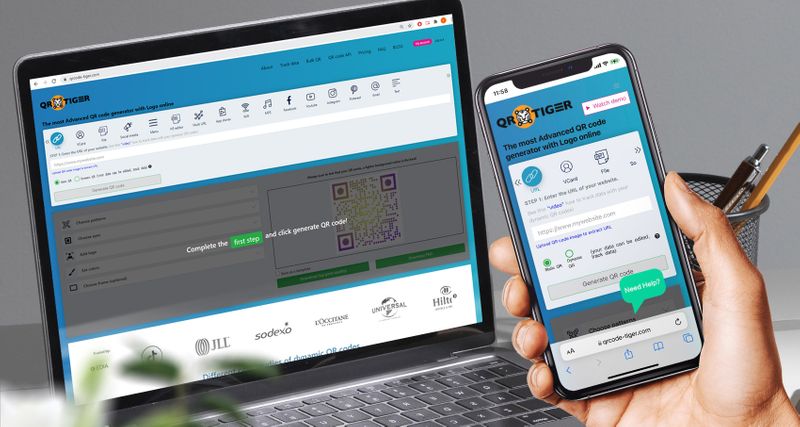 With QRTIGER QR code generator online, you can entrust to convert your file into a QR code.

QRTIGER is one of the QR code generators online used by many brands worldwide.

You can also check their website and see many international brands that have already used them.

It could be an Mp4 file, Word document, Excel, PDF, image, and many more.

However, if you need to embed multiple images in your QR code, you can use the image gallery QR code solution.

To start converting your file into a QR code, simply tap the green button that says “generate QR code.”

A little design can go a long way.

Moreover, it’s important to check if the QR code scans easily as it should be.

A QR code that takes a lot of time to read might turn your scanners away.

Once you are done doing a scan test of your QR code, you can now start to deploy and print them in your marketing materials.

A PDF QR code solution is under the File QR code category which is dynamic and requires your active subscription.

Dynamic QR codes are advanced type of solution that allows you to track, edit your QR code, put a password, and many more.

However, users are still given the option to generate dynamic QR codes for free using a free trial version of a dynamic QR here.

When the user generates his QR code solution in a static QR, the information is directly embedded in the graphics of the code.

This means, it only allows you to input a limited amount of data.

Moreover, the information cannot be updated, and it stays permanent once resolved or generated.

However, they are free to create and allows an unlimited amount of scans using QRTIGER.

For example, in such cases, a file QR code converter solution is a dynamic QR.

When a file QR code is generated, users can input an unlimited amount of information into their QR code as the data is not directly stored in the graphics of the code.

It only stores a short URL in the code itself that leads the target audience to online information once they scan the code.

The dynamic QR code data is stored in the QR code generator software, which can be edited and replaced even if the QR code has been printed.

Once you change your data and update your dynamic QR’s information, it will automatically update its front-end materials where it is deployed.

It doesn’t even matter if it has been printed or distributed online.

Once you made an update, it will directly do a quick follow-through.

The QR code will automatically do its update and redirect the scanners to the new information.

The dynamic QR code’s tracking ability system is beneficial for marketers, business people, and advertisers who want to understand their target market.

Moreover, you can also activate the QR code password-protected feature if it is only intended to be shared with authorized individuals.

You should always and never forget to put a call to action or a CTA in your QR code. Without a proper CTA, scanners will not likely scan your QR code.

A call-to-action gives your scanners an instruction of what to do with your QR code.

Otherwise, how would they know that it is not only a piece of art but meant to lead you into something more?

That being said, you will likely get more scans if your target audience understands what to do with your code.

Do not make inverted QR codes

Your QR code’s foreground color should always be darker than the background color as QR readers are set to scan QR codes faster that are not inverted.

For example, the traditional black and white QR code we usually see.

With that being said, you should also put enough contrast to your QR code’s color and make it blurry.

It should be a high-resolution QR image.

You can always experiment on your QR code design but make sure you follow a set of guidelines/rules.

Only implement the action in your QR code

Most QR code mistakes users tend to make with their QR is that they over-complicate their QR code implementation.

QR codes have different solutions intended for a specific need.

Do not jumble all these things in one QR code.

Strategic placement of your QR code

Place your QR code where it can be easily seen and not overlooked. Place it at the eye-level surface.

Benefits of converting your file into a QR code

With file QR codes, you cannot only share your files right away but the end-user can also choose to download the file straight to their smartphone devices.

QR codes are both scan-able in print and online display, enabling you to get the most out of your QR code information distribution.

You can use this most, especially if you use QR technology for marketing and advertising.

This allows you to target both offline and online audience using QR codes.

File QR codes can be edited

Even if your QR codes have been distributed all over, you don’t have to worry about updating or correcting your QR code’s information if you find some typo or want to redirect them into the new information.

You do not need to reproduce another one because of the QR code editor feature.

For the same reason that QR codes can be updated to new data, you don’t need to allocate a budget for the printing costs.

You can distribute the fund with other essential expenditures.

You can check for the prices of the dynamic QR codes here.

The conversion tracking ability of QR codes is a massive advantage to the marketing and business sector should they use QR codes as their marketing tool.

This allows them to see data of their QR code scans and a better return of investment.

However, if you can to embed multiple images in a QR code, you can use the image gallery QR code solution.

Just go to the H5 QR code solution> click on the slider images> upload your photos.

To make your files easily accessible, scannable, and downloadable directly to smartphone users, convert your files to QR code.

With QR codes, sharing and downloading of your file has never been this easier.

If you need to generate your documents in bulk, contact us today so we can assist you.

How to create a QR code for a document

A word document to a QR code is one of the most converted files to a QR. Education and marketing mostly use this solution.

To share a file via QR code, the user only needs to point his camera towards the QR code, open the data associated with the QR and click the download option button that will be displayed on his smartphone screen.