A QR code for images displays image files to the user's mobile screen once the QR code is scanned using a smartphone device.

As the saying goes, "a picture is worth more than a thousand words."

Whether for marketing purposes or personal, images are always digested quicker, making them an essential addition to anything and everything.

That is why using digital innovation like QR codes for your image can instantly connect brands to their audience in one scan of their smartphone devices towards the QR code.

Integrating a QR code image on your materials is easy, quick, and an innovative way you can do to interact with your readers/audience while giving them a whole, brand-new experience.

For example, you're a hot-selling book author, and you want to engage your readers even more – so you decided to add pictures to your texts to make them even more catchy and appealing to your readers. (or even have it on your eBook).

Or assuming that you're a product manufacturer, and you want to show your customers an infographic on how the product should be used appropriately via packaging.

Now, what will you do?

But the problem is that we all know that a printing material only has limited space. It isn't able to put anything you want and is very constricted.

So what would be the best solution you can resort to?

Related: How do QR codes work? The beginner's ultimate guide!

What is a QR code for an image? 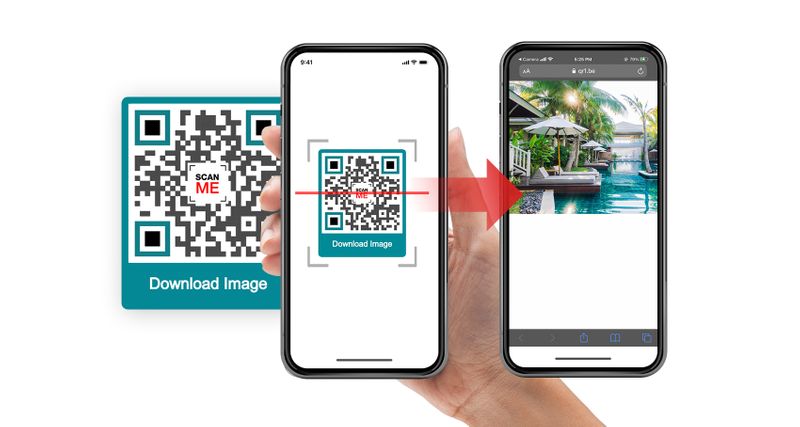 Just like QR codes are used in advertising, promotions, payments, and marketing, they can also encode an image.

A QR code image is a QR code that displays pictures or photos to your target audience's smartphone screen once scanned.

By scanning this code using smartphone devices, users can easily access the QR code picture and even save it on their phones.

This is just like an MP3 QR code that allows you to listen to an audio clip or a soundtrack. Or a PDF QR Code that lets you see and download the encoded PDF on your smartphone device.

How to convert an image to a QR code?

Depending on the QR code generator that you are using, the process will vary. However, for www.qrcode-tiger.com, it is as simple as a couple of clicks of a button. 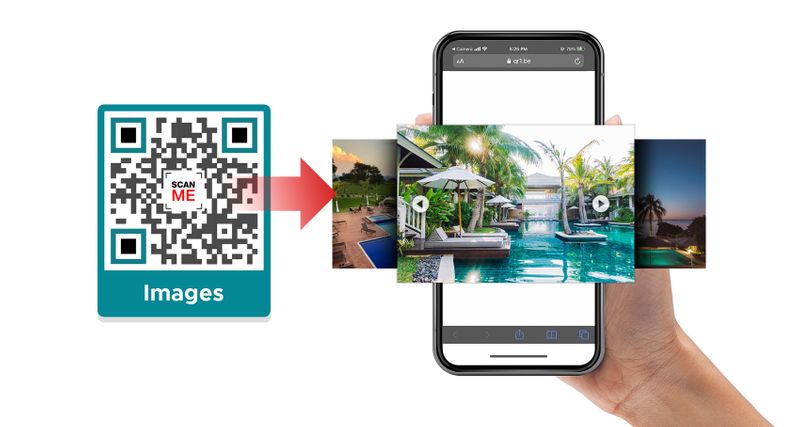 If you need to generate multiple images in one QR code, you can also use the H5 QR code solution.

This solution will display a series of images on the user's smartphone device.

Benefits of a QR code for images

To further differentiate a QR code image from its other QR code counterparts, take a look at the benefits it brings. 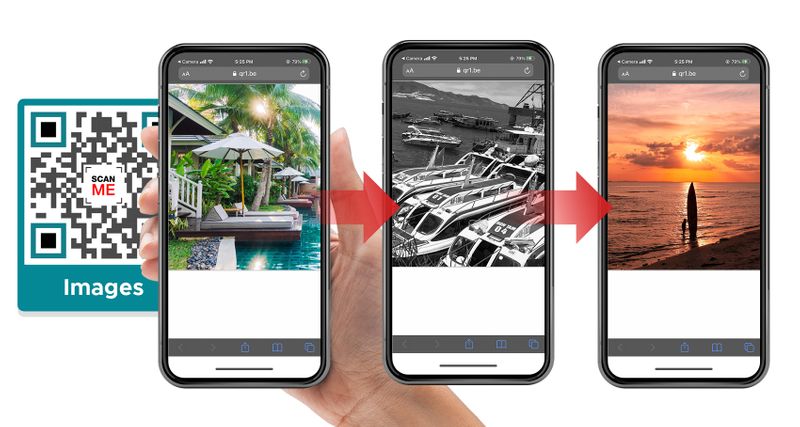 Even if your image QR code has been printed on a book, online, or your materials, you can edit your image QR and redirect it to another image file.

It is possible in QRTIGER as an image QR code is a dynamic QR code in nature. Using this, you don't need to print your code again.

All you need to do is go to QRTIGER's online dashboard, where you have generated your QR code, and edit it right away!

This allows you to save your money from all the printing costs!

Related: How to set up QR Code Tracking: A step-by-step guide!

2. Simple and fast to create 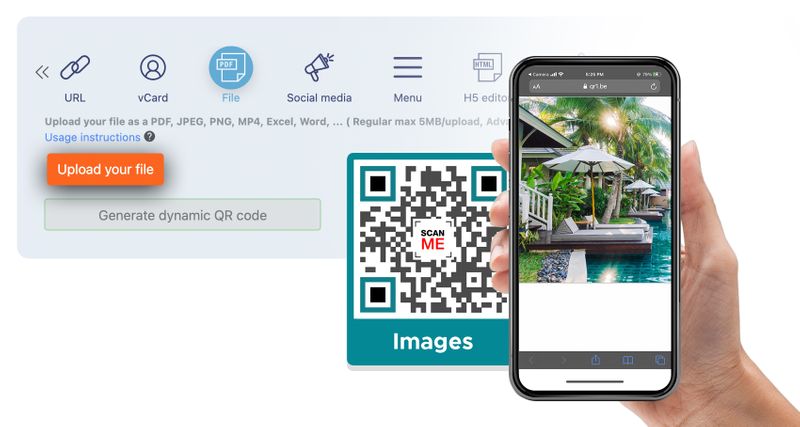 QR codes generally function to direct scanners to links or websites. This means that in most cases, you need to have a website or social media account to use your QR code.

However, with this type of QR code, you don't need to have a website where you have to put your image. Instead, you can directly convert images to QR codes with the QR code generator software you have. 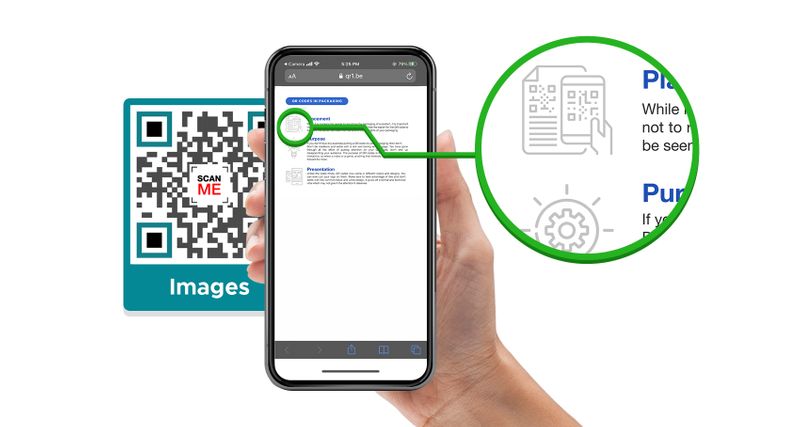 Traditionally, if you want to show an image, you have to put it on a website and link the URL address to the QR code.

The problem arises with the encoding and conversion of the image on the website.

There is a significant decrease in quality in most cases, which can be problematic in certain situations.

The QR code pictures immediately integrate the photo into the QR code. Hence, there is no decrease in resolution.

This is necessary if you are marketing an infographic where every pixel counts for readability and legibility.

With QR code images, the only thing needed is the image itself. What this means for you is that you only have to concentrate your resources on creating the photo.

In addition, for your audience, images are much more intuitive and easier to understand than having to navigate through an entire website.

How to make a QR code for a picture? A step-by-step guide! 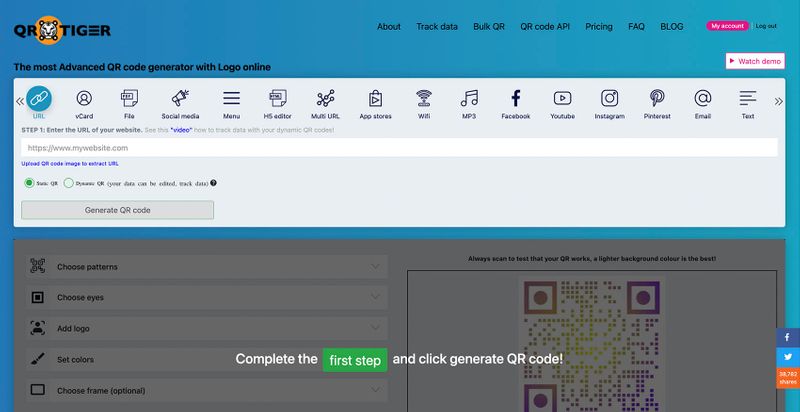 QRTIGER is a QR code generator that allows you to generate and convert an image to a QR code. You can also add a design to your QR, select the layout pattern, add a frame, logo, and colors!

Next, you can customize your QR code by choosing from multiple patterns eyes, adding a logo, and setting colors to make your QR code stand out.

Step #4 After you're done, do a scan test and hit the download button

Before you download your QR code, make sure you do a scan test first and check if it correctly redirects you to the QR code picture that you have embedded.

Related: QR code test: How to test if your QR code works

Simple as QR code images may seem, they have a wide range of applications.

In most situations, they even outweigh conventional QR codes in viability. Here are some of the situations that we mean to give you an idea about. 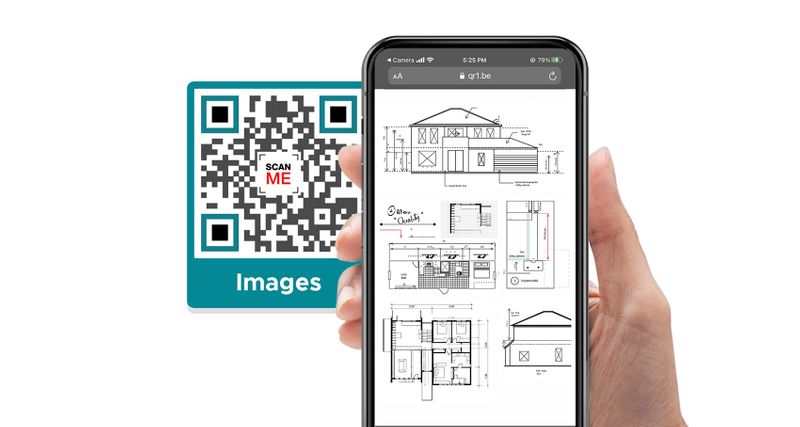 Want to tell your customers or audience where your store is located? Use a QR code that will show them a map.

The same idea applies if you want to give people a blueprint of the store layout to improve your customers' shopping experience. 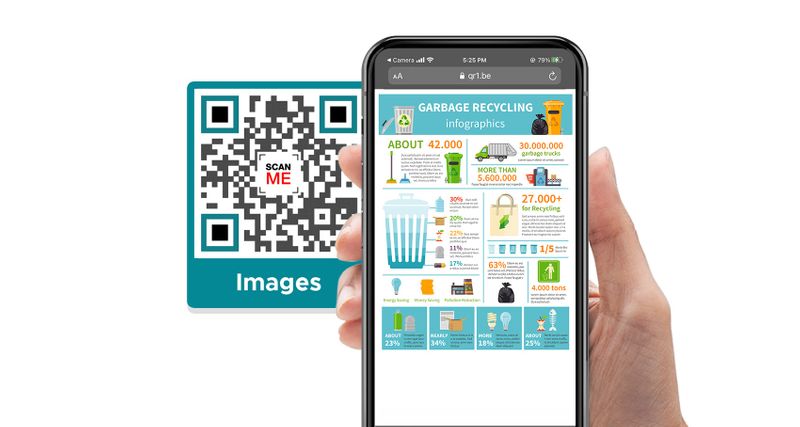 To improve the customer experience for your products, attach a QR code to the packaging that will show them an infographic or instructional on proper usage. 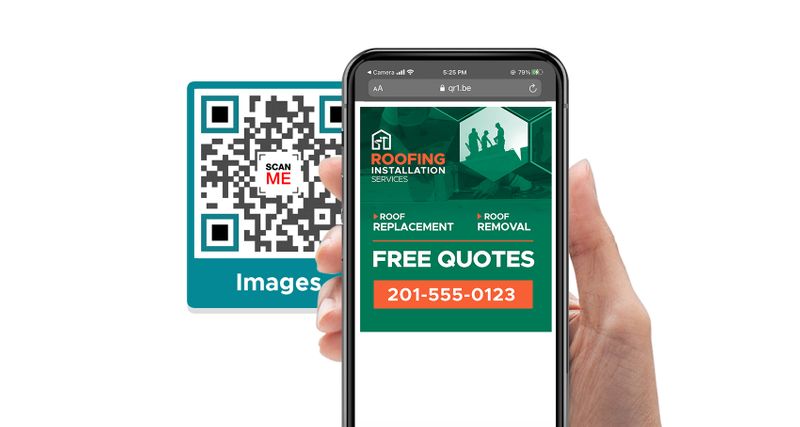 Print media such as flyers and magazines have limited space. As a result, it is almost impossible to put every image of every product that you are trying to sell.

To save some space and make things more organized, opt to use QR codes instead.

Have your audience scan the code to see what a particular product looks like. Since this is a digital medium, you can show a lot more than just the product.

If it is clothing, include photos of people wearing it to give customers a better image of it.

Related: How to use QR codes in Magazines & Newspapers?

4. QR code image as an alternative for restaurant menus

Just like magazines, restaurant menus don't have much space. So, if you want to give your customers a better image of a certain dish, use QR codes.

The restaurant customer can scan the QR code and be redirected to the online menu provided by the app.

It will then provide enticing and appetizing images of the restaurant menu since the quality of the image is top-notch.

Why? To help visitors get a soft copy of an artwork, a painting, or an artifact in an exhibition.

Related: How to make your restaurant or bar menu in a QR code?

How to Edit Your QR code for picture

In the event that you need to replace the image associated with your QR code, the process is also as simple as a few clicks of a button: nothing too hard or too much to remember.

Now, when your audience scans your QR codes, they will be directed to the newly uploaded image. This is a benefit of a dynamic QR code, saving you the need to create, print, and distribute a new set of QR codes.

It's just that easy! No need to reprint your codes!

Related: How to Make an Editable QR Code?

What type of QR code is a File QR code?

An image QR code is under the file QR code category, a Dynamic QR code.

What's more interesting in the file QR code is that, not only allows you to encrypt an image but- you can also upload here a PDF file, JPEG, MP4, MP3, image, word file, and excel life!

So for example, if you want to re-target your image file and replace it with a PDF or MP4 file, this is very possible in QRTIGER.

And as we have discussed, no need for you to print your codes all over again.

That being said, a file QR code enables you to have a multiple QR campaign using a single QR code! Which is flexible and cost-efficient at the same time.

Moreover, dynamic QR codes also allow you to track your QR code scans and get insights into your scanners' demographics to gauge for yourself if your campaign has been effective.

With a Dynamic QR code, rest assured that your QR code is provided with greater security when dealing with your data!

Related: How to Make an Editable QR Code?

Tips to Remember When Converting an Image to a QR code

Remember that your QR codes are only as good as the attention they attract. No matter how effective and efficient you programmed your QR codes, if nobody scans it or it doesn't even work, then all your efforts will be for nothing. So, here are a few reminders to keep in mind. 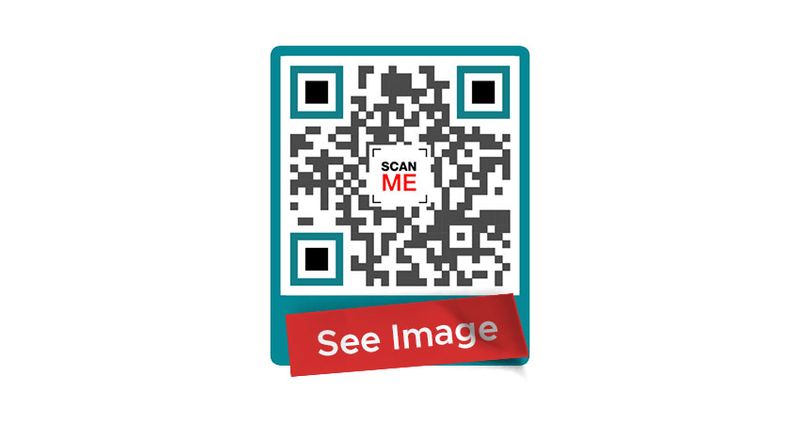 Never forget to add a bold call for action and frame on your QR code like "scan to see more details," as you need people to scan it.

Right now, QR codes can function in various ways, so don't expect your audience to understand the purpose of your QR codes intuitively.

Instead, place a call to action to give an idea of what your QR code is all about to attract your audience's attention.

Related: How to use QR code frames to attract more scanners!

2. QR Code Color and Background Should Have High Contrast 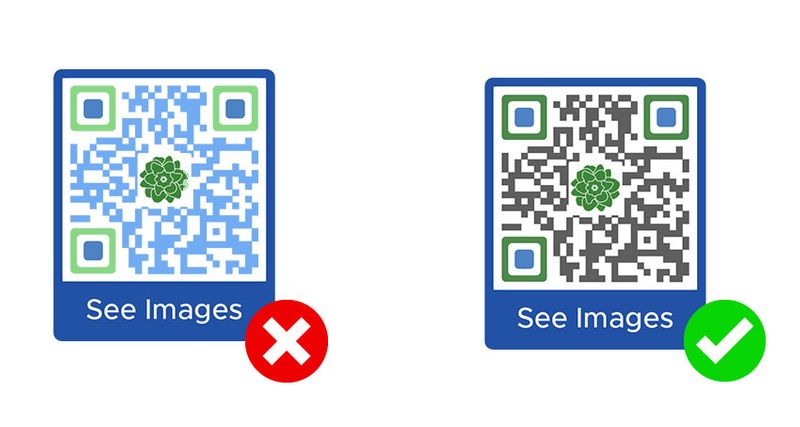 Your QR code will be read by a mobile phone camera. What this means is that it is only going to interpret what it sees.

If your QR code blends a little bit too well to the color of the material where it is printed, it may cause some problems and in the end, not work completely.

Most people don't usually understand the difference between SVG and PNG file formats and it could end badly.

When downloading your QR code image after being generated by your QR code generator, you will be given two choices on the format of the image; you like SVG or PNG.

It is advisable to opt for SVG since resolution does not decrease when resizing. When the image quality of your QR code diminishes, it could end up malfunctioning.

Related: How to Avoid Mistakes When Making a QR Code

Integrating innovative digital tools like QR codes is advantageous for both users and end-users. It is easy to incorporate, maintain, and be quickly accessible.

Despite their ease of use, they are still extensively applicable, and they are the most viable choices in most certain cases.

Never underestimate the simplicity of QR codes because they can make or break your business. Learn to adapt and find ways to implement QR codes to stay competitive.

You don't need to be a QR code enthusiast. If you want to know more about how to make a QR code for a picture, go to the best QR code generator now!

Related: How to create a video QR code in 7 steps!

Can We Convert Image to QR Code?

Yes. The only prerequisite to converting an image to a QR code is to have it in either a PNG, PDF, or JPEG format. By then, any image can be converted.

It's that simple. Not much to remember. The next question would be how to link a QR code to a picture?