Businesses look at QR code statistics and data when making decisions if they should implement this or not.

While QR codes can be seen almost everywhere and anywhere today, that is not enough to tell you whether or not you should adopt the technology and ride along with the trend in the market place.

You never truly know what is going on. QR code usage may be gradually growing in usage every year and you are going to see positive results in your adoption, but it could also go the opposite way, with the trend going out of the door, resulting in wasted investment and effort.

This is where QR code usage statistics get in the picture. This gives you to have an exact understanding of what is happening, allowing you to effectively decide what your next step will be!

Related: How do QR Codes Work? The Beginner's Ultimate Guide!

QR codes are not going to be consistently famous throughout every country. Those with greater economies are going to see a much bigger QR code usage statistics over others.

This might be because financially stable communities are able to make use and take advantage of modern technological resources.

Depending on which country you are situated or your intended target market, knowing the QR code popularity statistics is important knowledge. 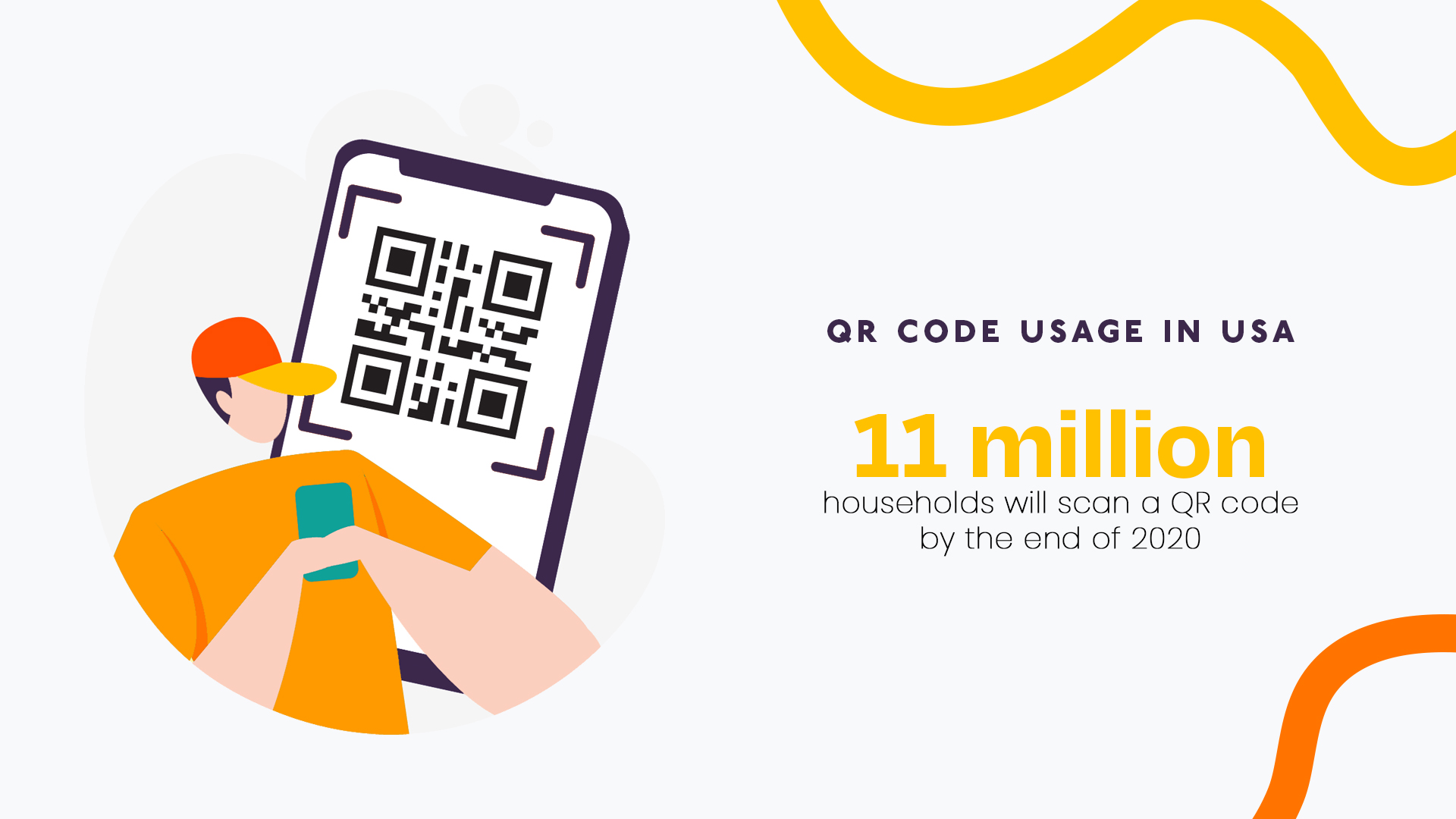 If there is one country experiencing positive feedback from QR codes, that would be the United State of America. They have been one to have seen early adoption and that has only improved throughout the years.

According to a survey by Statista, a total of 11 million households will scan a QR code by the end of 2021. Compare this to 9.76 million in 2018 and you can actually see the growth in millions every year.

Related: How popular are QR codes in the USA? 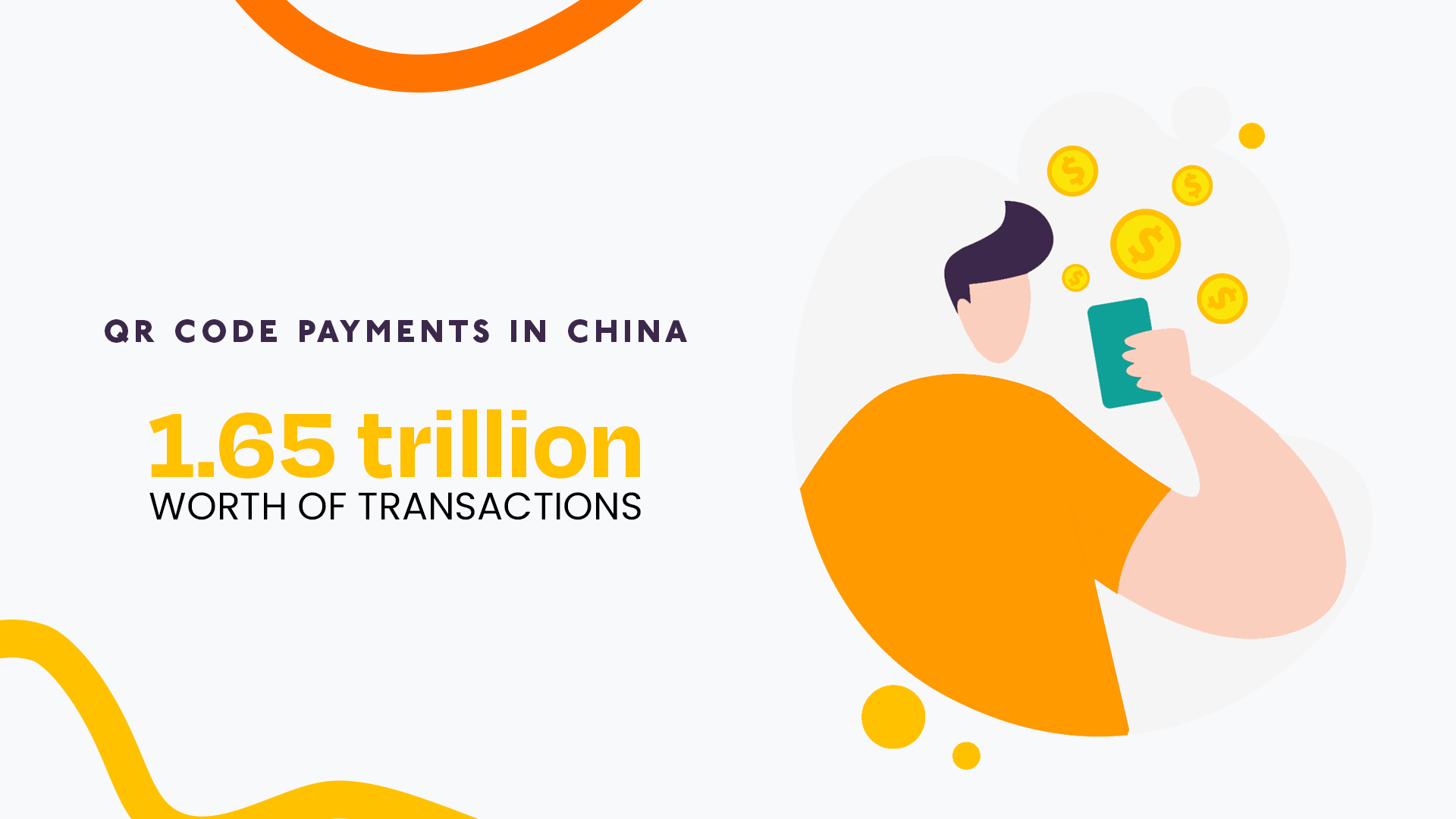 While most countries are still finding ways to introduce QR codes, China has already taken the lead.

All of it is attributed to WeChat which made the nation extremely obsessed with QR codes, resulting in a spike in QR code acceptance statistics.

WeChat opened a lot of avenues for QR code usage in the country and from there on, other apps rode along with the trend. Before they knew it, the country’s citizens already considered QR codes as part of daily life.

As a result, $1.65 trillion worth of transactions were done all through QR code payments in 2016 alone.

That value has significantly increased in succeeding years, especially since that according to a 2019 survey, 50% of QR code scanners manage to regularly scan QR codes several times a week.

As a matter of fact, China ranks as the fastest growing country for mobile payments. Easily surpassing the United States along with the rest of the world. All thanks to the dawn of QR codes. 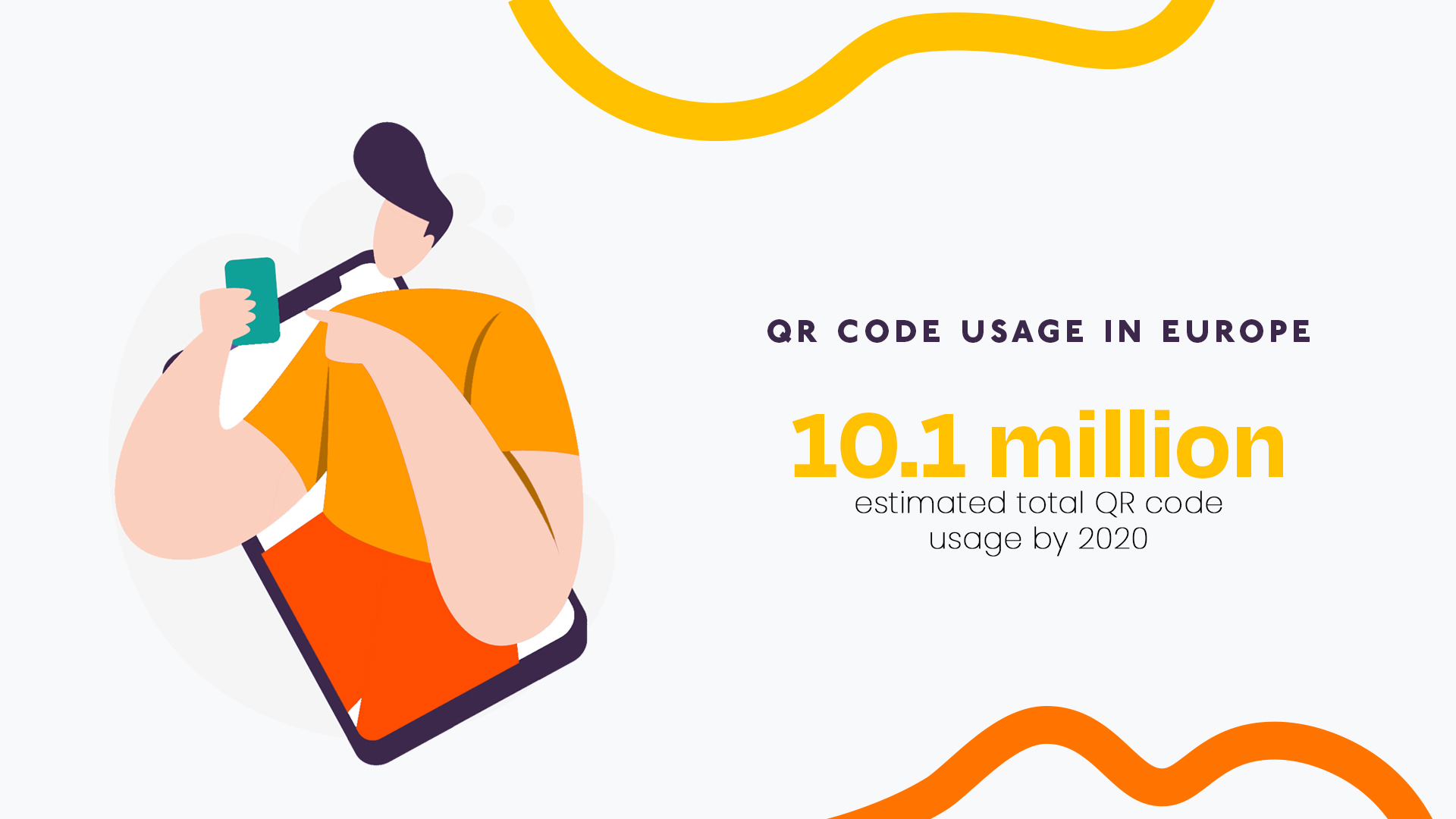 Collectively, European nations are also getting along pretty well with QR code integration. There is great QR code popularity statistics throughout the market and the impacts are only getting bigger by the year.

From 2015, it is estimated that the total population that is now considered as regular QR code users have doubled by 2018.

With that being said, the 2021 estimation for total QR code usage is at 10.1 million.

The amount of QR code interaction the region has is linked to the estimated 8% of customers scanning QR codes several times a week.

There is definitely a much larger population to expand to, but considering the growth trend of its QR code popularity statistics, it is not far off for the penetration to reach deeper into the population in the succeeding years.

Related: How QR codes are rising in Europe since they have used them in pretty much every field 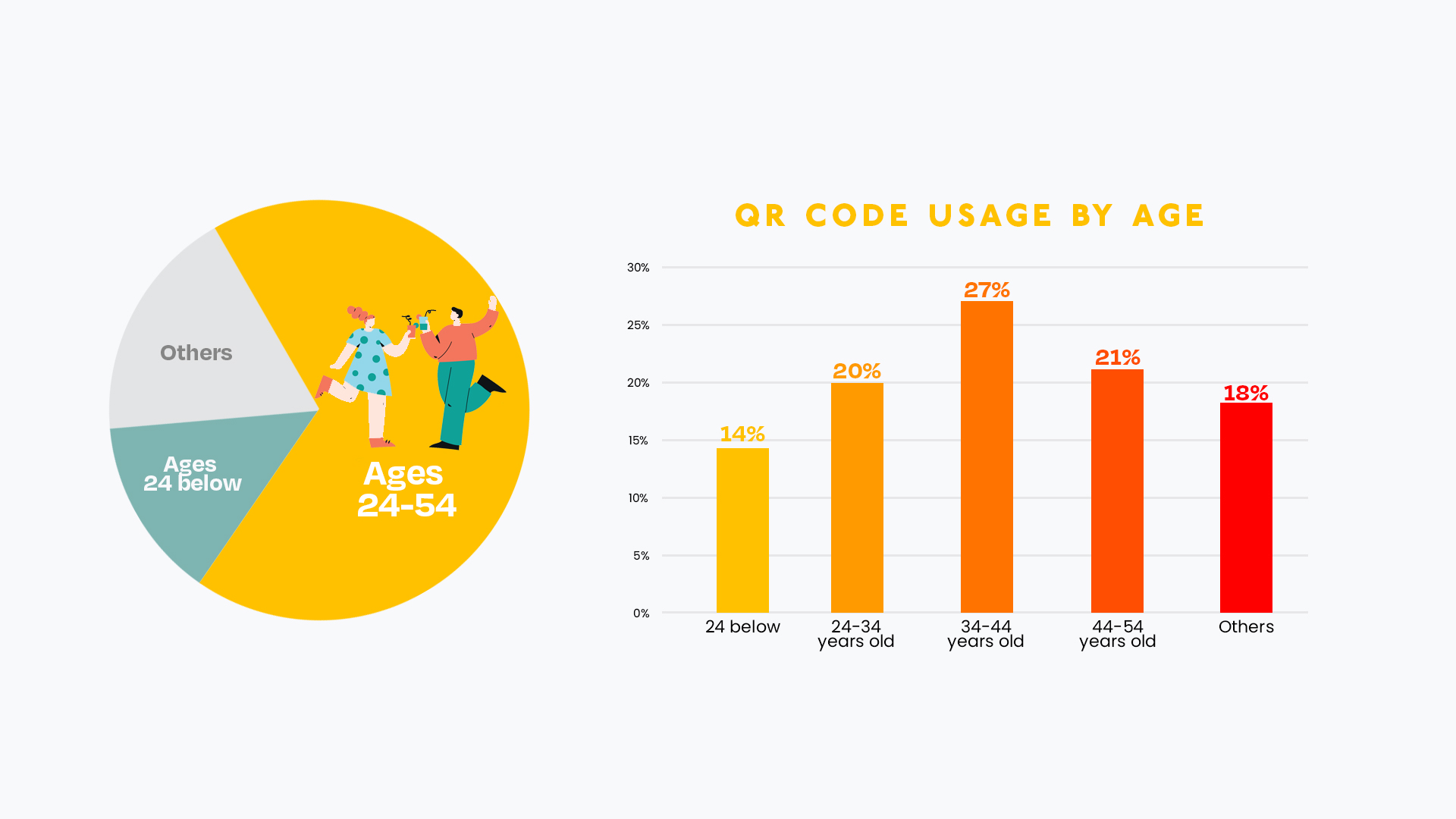 Not everybody is scanning QR codes. Some are just too young to know about it while others are on the opposite spectrum: being too old to be bothered to learn new things.

Knowing the age bracket will give you an idea of how to mold your QR code campaign to ensure effectiveness. Or whether or not your pursuit is worth integrating with QR codes.

The most recent study conducted was in 2015. According to the QR code usage statistics, the ages between 24-54 years old had the most interaction with QR codes.

The significance of this data suggests that people who are in the stage of independence such as making personal purchases and choices are much more likely to engage with QR codes.

However, the data have been expected to have made a shift that would favor the lower age brackets, especially with the introduction of a number of apps that are starting to make good use of QR codes. One of which would be Instagram.

Related: Instagram QR code: What is it and how to use them?

There are definitely lots of uses for QR codes. It can be placed almost anywhere and be programmed to the desire of the client, but right now, some applications stand out over others.

Related: 10 Genius Use Cases of QR Codes in Marketing that Converts into Sales

QR Code Use Statistics of Coupons/Promotions 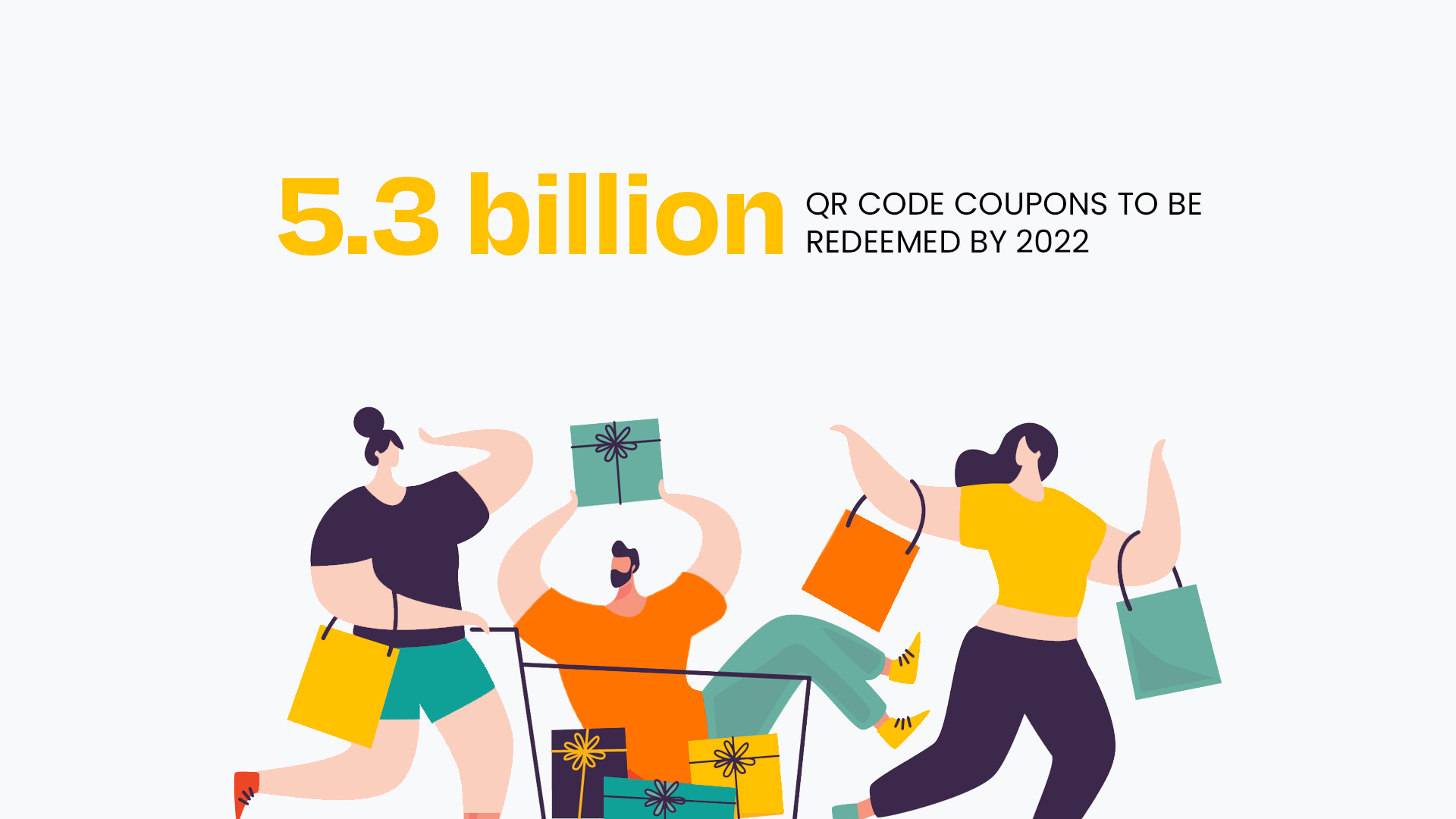 Payments come in first and then followed by discounts via coupons and print promotions. This application is so dominant in the current QR code usage statistics that in 2017, an estimated 1.7 billion coupons were solely through QR code scanning.

It doesn’t end there. By 2022, that number is expected to not just double, but increase by a factor of three at 5.3 billion.

The penetration of QR codes in promotions is evident. Not only does it show consistent usage today, but shows promising predictions for the future. Enough to give you an idea of your next step if you are planning to get into QR code marketing.

Related: How to use a QR code on Discount on Giveaways?

QR codes have become an integral part of product packaging. Look at the corner or the bottom of grocery products and you can find QR codes.

They have become a standard for providing a digital aspect to the printed material, allowing for more information and content to be accessed.

However, what is the actual QR code marketing statistics in terms of packaging? Apparently, massive is an understatement. The technology has become a cornerstone in packaging standards.

In China, QR codes have become a trend in packaging. So much that it has become a basis of trust by a lot of customers.

According to a survey, 65% of customers say that if they are able to scan a QR code off of the packaging, they develop a sense of trust.

China is not alone with its massive QR code packaging adoption, neighboring Asian counterparts are also doing the same. Korea and Japan have experienced a skyrocketing increase as well. In just 4 years, from 2014 to 2018, QR codes on packaging have increased by 83%.

While not every country is following the same QR code marketing statistics, globally, the trend is at an upwards motion. Putting a figure on it, the QR code statistics are at an estimated 8% growth in QR code-enabled smart packaging.

Related: How to use QR codes on product packaging? 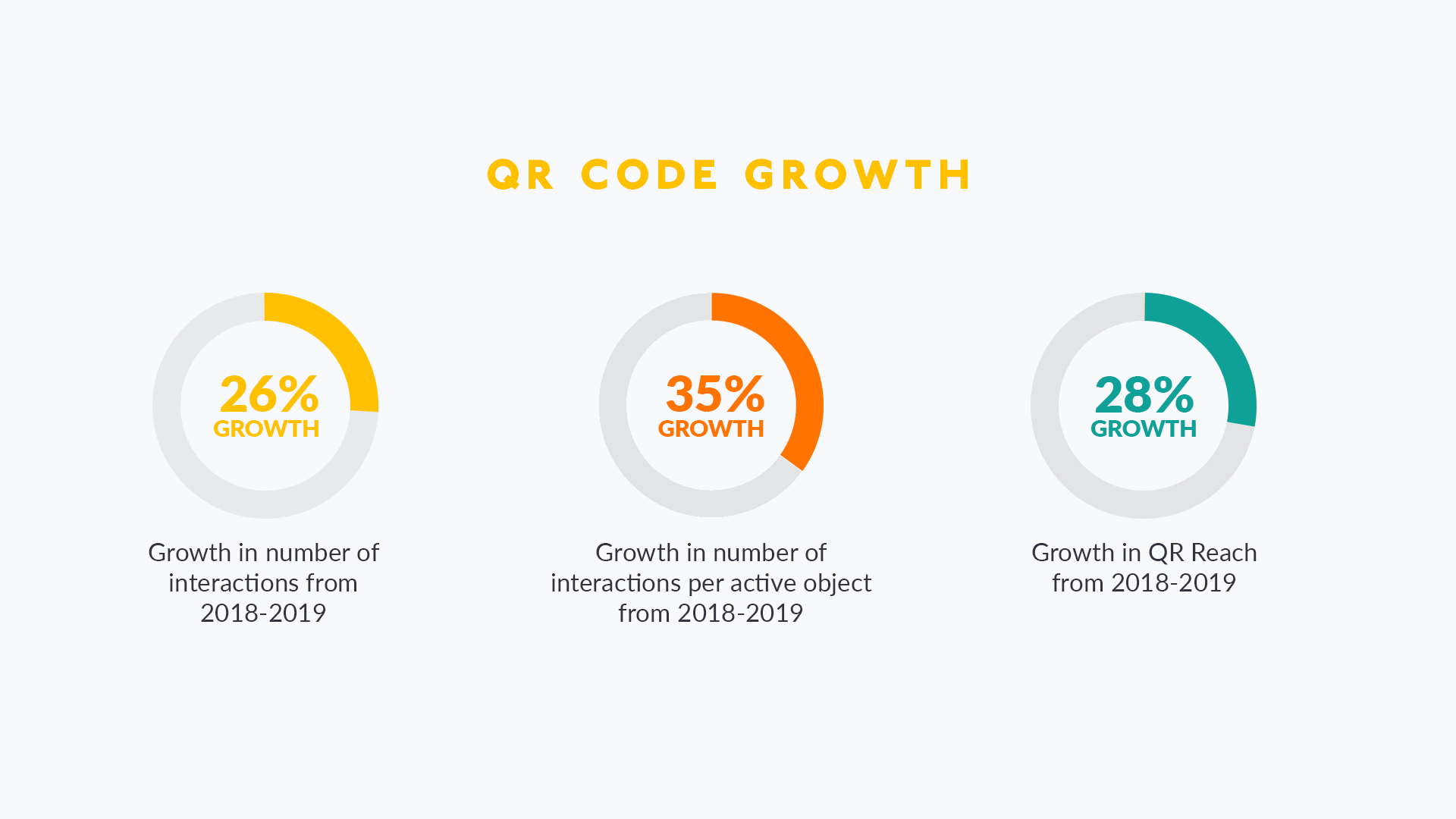 With every year, more organizations are starting to adopt QR codes to modernize how they do things, and for good reason. There is also a steady growth of an audience that is utilizing the use of the technology.

More people are integrating QR codes into their daily lives engaging in them more frequently and looking for products that are implementing them efficiently.

From 2018 to 2019, a total of 26% increase in interactions was observed. This translates to more unique people starting to engage in QR code activities.

Repeat engagement on the other hand showed an increase of 35%, suggesting that people are scanning a QR code not just once.

This shows the continuous and growing penetration of QR codes among customers, and the QR code popularity statistics are big enough to suggest further growth in the incoming years.

These numbers are telling of a trend: QR code statistics are not going down. If anything, it suggests a continuous exponential rise in growth in the incoming succeeding years.

What Fuels These QR Code Use Statistics?

With confidence, growth in QR code statistics are not just guesses but are actually expected to push through due to two main factors: increased access to mobile devices and high-speed internet.

These will ultimately further empower the appeal of QR codes into the modern market.

According to the recent study by Juniper Research, 90% of the world’s population will have access to high-speed internet in 2021. 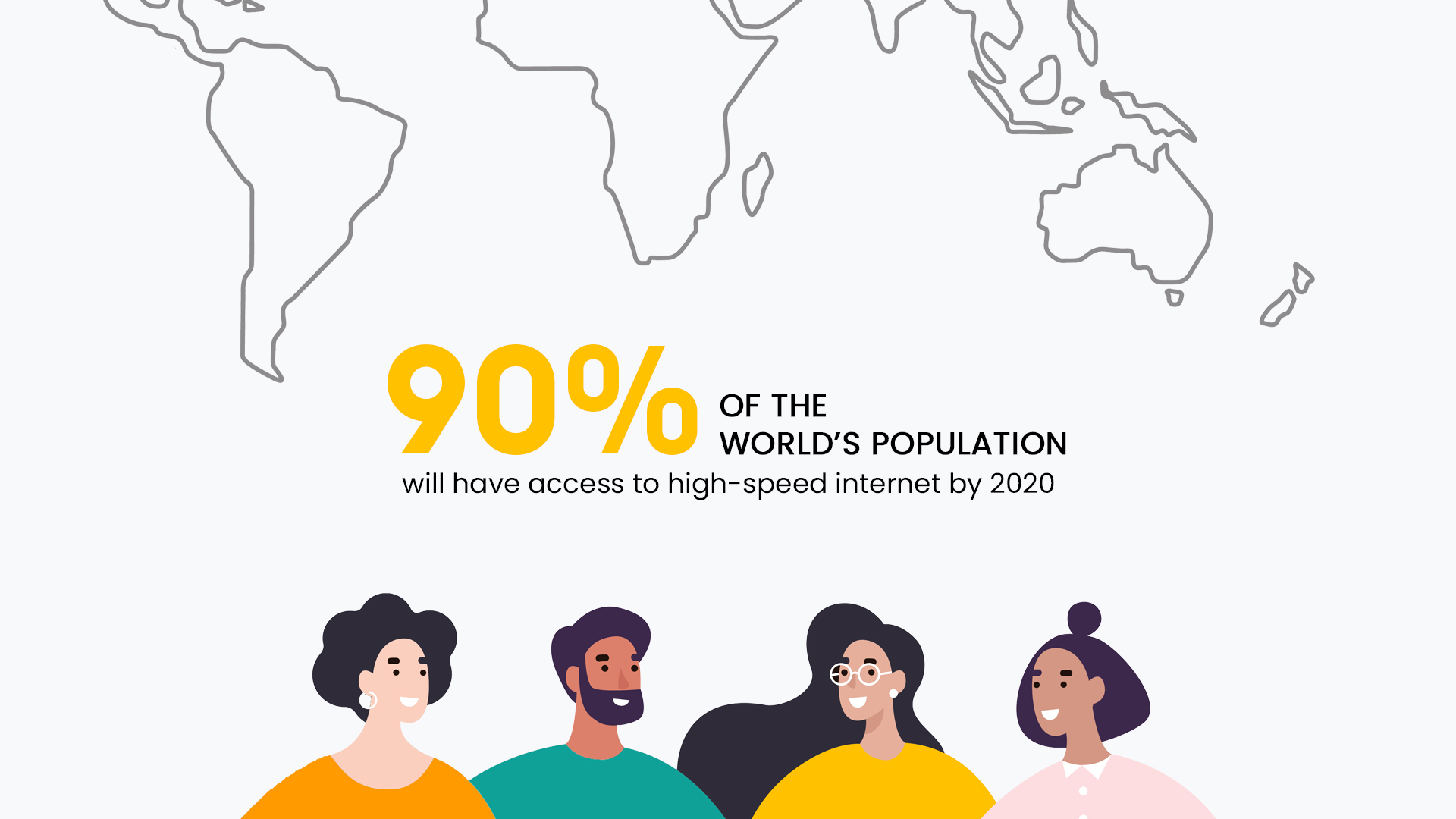 South Africa is just one of the regions in the world that are economically challenged but are set to have 80% of its population to own a smartphone in 2021.

Topping the list of smartphone penetration in the United Kingdom with almost 83% of its population already owning one.

An additional factor in the growth of QR code usage statistics is the readiness of most mobile devices. Apple devices come integrated with QR code readers whether or not users have the intention of using it, resulting in an effortless transition.

According to Apple, 92% of its devices are QR code-ready. This is after they introduced the QR code reading feature in the camera app ever since iOS 12.

The QR code statistics surely don’t lie. The evidence backing up the growth and viability of QR codes in the coming years is inarguable.

Without a doubt, QR codes are a worthwhile investment for the long run. It is starting to become an integral part of everyday life for a lot of people, and as a business owner, to extensively benefit from this, you should be jumping into it as soon as possible.

If you have more questions about QR codes, please contact us.

Related: How to generate a free dynamic QR code in 5 steps